What The−? Minority Report

This is a new segment on the Sector M blog, one where I take a subject matter (usually something to do with sci-fi, movies, comics, etc.) and explore what’s wrong with it. This will usually be something that should have been a slam dunk, but somehow didn’t live up to its own hype or potential. For our first time out, I’ve chosen the 2002 movie, Minority Report. 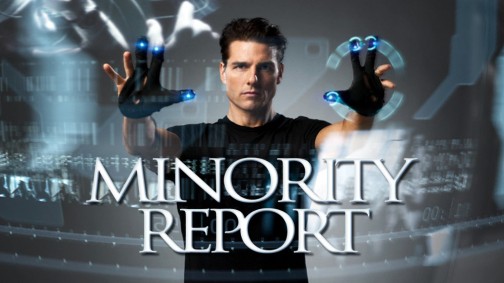 Note: Not “Manos”: The Hands of Fate.

This was a ‘tent pole’ big-budget blockbuster with Tom Cruise playing the lead character and directed by Steven Spielberg. It was (loosely) based off of Philip K. Dick’s short story of the same name. Set in 2054, Cruise’s character, John Anderton, is a cop who specializes in “PreCrime.” In this future, the crime of murder has all but been eliminated by the presence of “PreCogs,” who are psychics who can see into the future.

When a murder is about to happen, Anderton’s squad receives an image of the crime from the PreCogs before it happens. They have only a short time to find out where the crime takes place based on the vision, get to the scene of the crime, and stop it before it happens. Everything is going okay until Anderton receives a vision of himself shooting a man in cold blood. Since you are guilty of crimes before you commit them in this world, Anderton is now on the run from the law and out to try to prove his innocence.

Here’s what’s wrong with it:

So, when a PreCrime is reported, the first thing to show up at the police station is not the recorded psychic vision itself, but one laser-cut wooden sphere inscribed with the victim’s name on it and another with the perpetrator’s name. They make a reference that the unique wood grain of each ball makes it virtually impossible to duplicate or fake.

The problem with it is not that this seems like a pretty weird way of handling things, but it brings up a question in my mind – how do they get that information? From the initial scene, it seems like the psychic vision is the only information that the cops have to go on. They have to look for landmarks and clues within that vision to find out where the crime will happen, yet the PreCogs apparently also transmit the name of the victim-to-be on a separate channel. If the PreCogs can know a victim’s name, and the name of the would-be criminal, why don’t they also know the victim’s address?

This is a cautionary tale of using time-travel elements in sci-fi, and how they can go wrong in a hurry. So, when a PreCrime vision comes in, there is a timer attached to it, counting down to the time of the murder. Like the name on the sphere, it’s never clear how they get this information, but there it is. The problem is that crimes of passion have a much shorter time span than a crime that is premeditated. 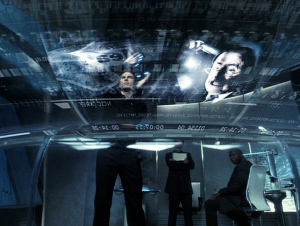 On the surface that might seem intuitive; someone who decides to kill on the spot gets a smaller window than someone who plans it out. It is, however, utter non-sense. You are looking into the future. Even if it was a seemingly random string of events or emotional states that lead up to the crime, even if it was an on-the-spot decision, the outcome is already part of the time stream. The intentions behind the crime are irrelevant.

Anderton is on the run and realizes that too many places have retinal scanners that could identify him. His solution? Get an eye transplant from a less-than-reputable street doctor. It makes sense − change your eyes so they can’t track you. It also shows off both the seedy underground nature of the world as well as the ease with which such an operation can be accomplished. Yep, we’re in the future, all right.

Once complete, Tom Cruise walks into The Gap and it scans his eyes. The holographic store greeter calls out, “Hello, Mr. Yakamoto! Welcome back to the Gap!” That tells us that the dark eyes that Tom Cruise has from then on were not cloned or grown, but taken from another person who apparently also shops at The Gap.

Sure, it solves the basic problem of being tracked, but if it comes from another person, who has an existing profile in the system, won’t that be noticed pretty quickly by the Big Brother security systems in place? Tom Cruise may be many things, but he doesn’t look Japanese. Someone’s bound to notice.

Towards the end of the film it is revealed that (Spoiler Alert) Max Von Sydow is the bad guy. Not only that, but he has been killing people in his way for some time now. How can he do this given that the PreCogs’ whole job is to report murders before they happen?

Simple, he takes his victims to the site of a previous would-be murder witnessed by the PreCogs and kills them in the very same way. That way it looks like the psychic vision of the murder is merely an echo of one they’ve had in the past. It’s dismissed out of hand and everyone goes about their business.

The ripples, man…it’s all about the ripples.

Well, it’s a good thing that whatever extra-sensory organ the PreCogs use to see into the future always uses the same camera angles, huh? It would be pretty embarrassing if you went through all that trouble to stage a murder and then the vision showed your face in a close-up rather than see you from fifty feet away.

There is No Minority Report

So, Anderton sets out to prove his innocence. He seeks out Dr. Iris Hineman, one of the original pioneers of the PreCog program, to see if there’s been some mistake. He finds her and she seems like some sort of crazy and weirdly flirtatious Professor Sprout from Harry Potter. She tells him that the strongest of the three PreCogs occasionally sees an alternate outcome of a PreCrime. These are called “Minority Reports.”

The reports are immediately buried, however. Determinism is what drives this PreCog program in the first place. If it became known that there was a possibility of an outcome other what the PreCogs saw in their visions, it would undermine the entire system. Every person convicted under that law system might have been innocent since they were stopped before they could commit the act. So, Anderton pins his hopes on finding the Minority Report to prove he won’t commit the crime, going even so far as to break into the PreCog facility and kidnapping the lead psychic.

In the end, however, Anderton does actually the kill the guy, in exactly the same circumstances as seen in the original vision. There are extenuating circumstances, of course, but he still pulls the trigger and commits the crime anyway. There was no Minority Report.

Aside from that being the name of the friggin’ movie, doesn’t it strike anyone as odd that Anderton was framed and railroaded to commit this crime? How does one even go about setting someone up to kill a total stranger like that? The cause for him to go on the run, and ultimately kill this stranger, was the vision of him committing the crime in the first place. So, the effect becomes the cause that becomes the effect that becomes the cause. Paradox much?

Minority Report wasn’t a total loss, however. There were some cool sci-fi and action elements in this movie. It had many of the marks of Steven Spielberg’s skillful direction in it. Unfortunately, much of the good stuff was overshadowed by the underlying flaws in the story.

It always amazes me when an expensive, effects-driven movie like this comes out. So much money was spent making the magnetic cars and holographic interfaces come to life, but it seems that parts of the overall story were not considered much at all. That’s a shame. The script and story are probably the easiest and cheapest things to change in a movie of this scope. When I see such a magnificent failure, all I can say is…what the−?

This entry was posted on Friday, October 18th, 2013 at 8:20 pm and posted in Uncategorized, What The--?. You can follow any responses to this entry through the RSS 2.0 feed.
« Continuity in Sci-Fi
Why I Love The Doctor »

2 responses to “What The−? Minority Report”