On Catharsis and the Ghost of Tsushima

One act of kindness can make all the difference.

This year has been one of loss and uncertainty for many of us. In the last eight months I have lost three people close to me, all pillars of my world. One of them was my grandfather. As you might imagine, I was devastated.

At the time that he passed, I threw my grief into the proverbial drawer and slammed it shut. Not the healthiest approach, I’ll admit, but one I felt was necessary at the time. In the weeks following his funeral, I became withdrawn and depressed. I found myself stuck in a cycle of what-ifs and what-might-have-beens.

Then, out of the blue, a friend of mine reached out to me. “Have you played Ghost of Tsushima yet?”

I had seen the trailers. It looked like a dream game, but it was a PlayStation 4 exclusive. I didn’t own that game system. I had to put Ghost of Tsushima on the list with Horizon Zero Dawn, Marvel’s Spider-Man, God of War and a bunch of other fantastic games that were out of reach.

When I told my friend that I didn’t have a PS4, he replied. “I’ll hook you up.” I thanked him, thinking that he was going to send me a copy of the game for when I finally did get the system. A few days later, a brand-new PS4 showed up on my doorstep along with a copy of Ghost of Tsushima and Marvel’s Spider-Man. I was floored by his generosity.

My friend knew that I have a life-long interest in Japanese culture and samurai history, that I had been involved in martial arts at an early age (both my parents were teachers), and that I have a particular fondness for Akira Kurosawa films.

That is how the Ghost of Tsushima came into my life. One act of kindness.

[What follows contains major spoilers for Ghost of Tsushima, so turn back if you don’t want to know major plot points and/or how it ends.]

Everything about this game hit the mark for me, right from the start. The story, the cinematic cut scenes, the haunting soundtrack, the combat system, and most especially the breathtaking visuals — all spot on. This is one of the most beautiful games I’ve ever played.

In it, you step into the role of Lord Jin Sakai, a Kamakura-era samurai fighting against the Mongol invasion of the island of Tsushima in 1274. In the opening moments of the game, Jin and his beloved uncle, Lord Shimura, make a desperate charge to prevent the Mongols from taking Komoda beach. It’s hopeless, but they fight on against all odds. One by one the samurai around them fall, until only Jin and Lord Shimura are left standing. The Mongol leader, Khotun Khan, takes Lord Shimura captive and believes he’s killed Jin in single combat. (That’s a gross oversimplification, of course, but I don’t want to give everything away.) 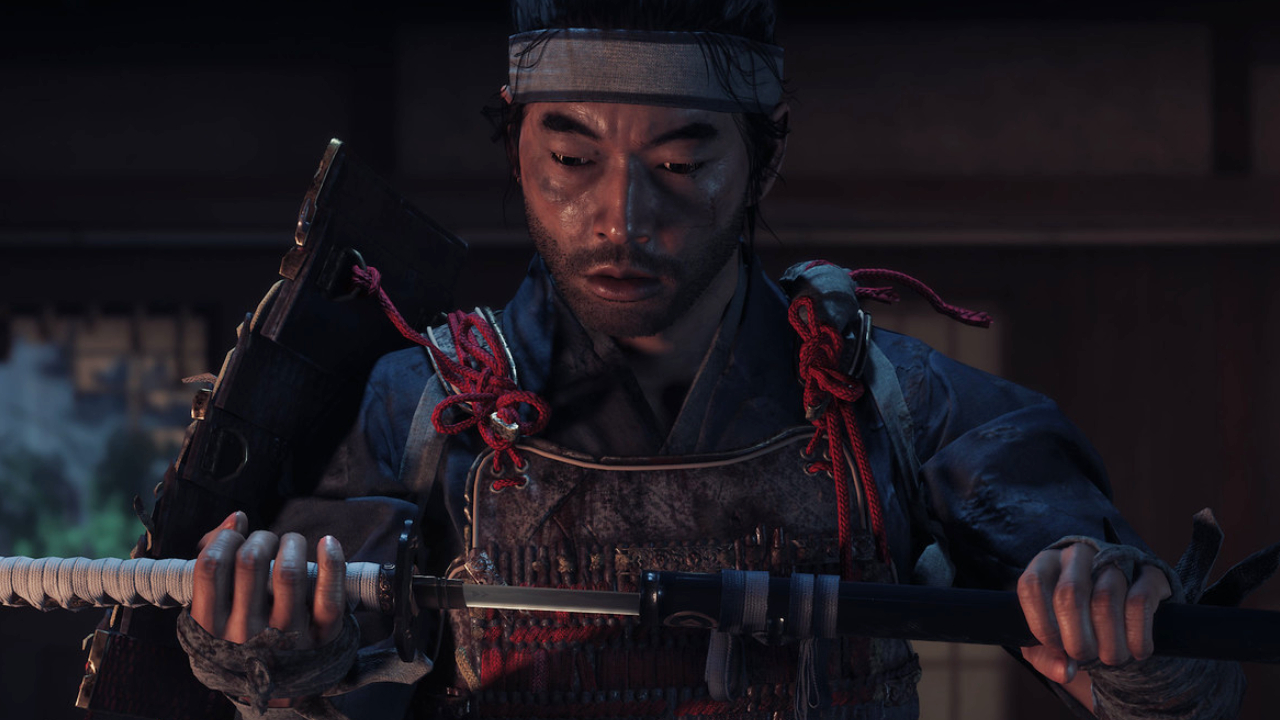 Saving Lord Shimura thus becomes your first major goal in the game. To achieve this, Jin has to employ tactics and methods that his uncle believes are not honorable, such as stealth and assassination. This marks Jin’s transformation into ‘The Ghost,’ a figure that strikes terror into the hearts of the invaders.

The relationship between these two characters is at the heart of this story. When Jin’s father is killed, Lord Shimura raises his young nephew as his own son. We get to see how their relationship grows over time. One of the combat tutorials is cleverly presented as a flashback to Lord Shimura’s lessons with the sword. These scenes show us what they mean to each other, even up to the very end. Lord Shimura represents the pure samurai ideal. He is a monolithic presence in Jin’s life. To go a little D&D here, he is the shining paladin that Jin aspires to be.

Some of the best digital acting I’ve ever seen is between Jin and Lord Shimura. You can see the gleam of pride in the older man’s eyes. One of the most touching moments in the game is when Lord Shimura tells Jin that he has petitioned the Shogun to make Jin his legally adopted son and heir. He will cease to be Jin Sakai and instead become Jin Shimura, the eventual jito (territorial steward) and leader of Tsushima.

Unfortunately, it’s never quite that simple in a story like this one. Jin’s role as the Ghost eventually brings the two of them into direct conflict. It’s absolutely heartbreaking to watch these two fall out. They both love and respect each other, but the course of events has put them at odds. Lord Shimura believes that Jin has lost his way; Jin believes that Lord Shimura’s inflexible code cannot answer the realities they face.

This is where real life crossed over with my experience in the game. What I just described is similar to the relationship I had with my grandfather (though, admittedly, there were far fewer Mongols involved). He was this larger-than-life figure when I was growing up, like a force of nature or a rock star. He was a cowboy as well, and those who follow the genre know how well Westerns translate into samurai stories, and vice versa.

I never fit into that mold. I tried to, I wanted to at times, but it wasn’t for me. As I grew older, we disagreed more and more about almost everything. You name it, we debated it. Sometimes things could, and did, get heated. We never came to blows, thankfully, and neither of us could stay mad at the other. Even if we saw things from vastly different points of view, I will always remember the times he helped me when things got rough, when I thought I couldn’t go on.

So, at the time that I crossed swords with Lord Shimura at the end of the game, I had no idea that I was subconsciously working through the complicated relationship my grandfather and I shared. So much of it feels unresolved between us, both the good and the bad. It’s clear now that this lack of closure had become a major impediment to coping with the grief I had bottled up inside.

At the end of the duel, you have the choice to either spare Lord Shimura’s life or grant him a warrior’s death. While so much of what I’ve learned told me to honor Lord Shimura’s last request, I found in that moment that I couldn’t do it.

This is where we part.

After everything the two had gone through together, for the bond that they shared, and because Jin’s name (仁) can be found as one of the virtues of bushido to mean mercy or compassion, I chose life.

How could I not?

As Jin walked off into the distance to the sound of “The Way of the Ghost,” something in the soulful sadness and beauty of Clare Uchima’s performance moved me, and my long-absent catharsis came at last. To give full credit to Sucker Punch games, I would have been greatly moved by that ending even without the underlying metacontextual ties to my real life.

It took me several days of soul-searching to understand why that moment in the game had affected me so strongly. Then it hit me: Ghost of Tsushima, to me, is a story about letting go of the past while still honoring it, about becoming who you really are rather than who you were expected to be. That’s exactly where I was emotionally.

I saw myself and my struggle mirrored in the story, if just for a moment. And seeing it play out before me like that gave me just the jolt I needed to break the cycle and start working through it. Like Jin, I may never have the full closure I seek, but in the end maybe that’s not necessary to accept the loss and continue living.

Life is strange like that. Sometimes it takes playing as a fictional samurai to teach you something about yourself. I won’t lie here, folks, opening up the floodgates has not been easy. Some days are easier than others, and I still have a long way to go in the grieving process.

I’m a big believer in the healing power of art. In the past, books, music, and fandom have seen me through times of emotional hardship and loss. This time it was a video game. It’s often debated whether or not video games should be considered an art form. For all that it accomplishes, for all that it means to those who play it, I’d say that Ghost of Tsushima is the most compelling evidence yet for a definitive yes to that question.

And to think, on my previous trajectory, I would never have had the chance to see the world through the eyes of Jin Sakai and, in turn, learn to say goodbye to one of the brightest stars in my sky.

One act of kindness, folks. Sometimes that’s all it takes.

My latest book, STRANGE REPORTS FROM SECTOR M, is available on Amazon in both hard copy and e-book format.