Why I Love The Doctor

I’ve heard it said that being a geek means never having to say you’re sorry for loving something. Good thing, because this blog post is all about why I love the Doctor in Doctor Who.  If you’re a Whovian already, this post is likely just shooting fish in a barrel, but I will tell you why I love the show and the character of the Doctor in particular.

For those of you who are not necessarily fans of the show, here is a peek into that particular fandom.  It’s true that Whovians occupy a strange niche of the overall sci-fi genre. You can see them at conventions with their scarves, long coats or bow-ties, often waving around sonic screwdrivers with every photo-op.  Or maybe it’s just a T-shirt with a blue box on it or the words “Don’t Blink.”

Regardless of what they look like, these folks are linked together by a single television series that first debuted in 1963. The central character of that show is the Doctor (BTW, his last name is NOT ‘Who’), and is one of the most compelling and enduring characters in all of science fiction. Here’s why I love him:

This year marks the 50th anniversary of the show.  With more than 200 episodes in its continuity, not to mention novels, video games, comics and radio plays, the Doctor has been on a lot of adventures. This gives him a body of past accomplishments that practically dwarfs any other sci-fi character. Doctor Who is, after all, the longest running sci-fi TV show of all time.

Even in the current series, there are references and throwbacks to things which happened at the very beginning of the series.  By this point in the storyline, the Doctor has achieved a nearly unrivalled heroic status. I mean, if you can boast that you’ve saved the Universe or the Earth more times than Kirk or Picard, and possibly as many times as Superman, I’d say you have some bragging rights.

His Heart (Both of Them) 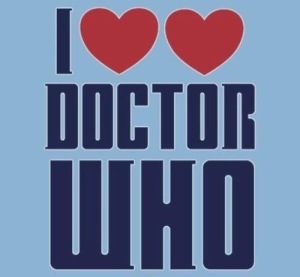 With all my heart.

The Doctor has lived over 900 years.  He’s fought evil forces and saved quadrillions of innocent lives. While some of his travels can be lighthearted, there are times when the Doctor is deadly serious, and must champion existence itself.  It is the force of his convictions and his almost unimaginable capacity for compassion and mercy that drive him. There are so many times in the series where he could have chosen the easy path and just walked away.  But he doesn’t.

The Doctor stands and fights, most of the time without weapons, and with only the help of his trusty sonic screwdriver and the companions at his side.  Yet, when the smoke clears, the Doctor is triumphant even against the most impossible odds. While he can’t always save everyone around him (the body count in Doctor Who can get pretty high), the Doctor finds a way − always.  He never runs out of hope. His hearts, much like his beloved TARDIS, have to be bigger on the inside, like a super-reversed Grinch.

His Mind Is His Greatest Weapon

Perhaps the thing I love about this character the most is that his mind is the most awesome weapon in his arsenal.  The Doctor is almost always able to outthink and outmaneuver his enemies, even if they initially get the drop on him. He has that uncanny knack for using the opposition’s strength against them.  So, the greater the force arrayed against him, the more dangerous he becomes.

In an age of brute-force action heroes, who are more concerned with kicking down doors and mowing down anything that moves, the Doctor presents us with a daring and compelling alternative.  He uses violence as a last resort, rather than leading with it. I think that this peace-loving mindset makes the storylines in Doctor Who that much more interesting and rich. (And this is coming from a guy who writes military science fiction!)

An Unbroken String of Great Performances

At the time of this writing, there have been 11 men who have played the Doctor in the main story (sorry, Peter Cushing and John Hurt!). If you ask a proper Whovian who the worst Doctor of the lot was, they might have a hard time answering. We all have our favorites, which can naturally eclipse some of the other incarnations of that most famous of Time Lords.

Here’s the cool part…even the weakest versions of the Doctor are still incredibly well played on screen. Each actor brought something to the role that stood out from his peers.  From William Hartnell’s First Doctor to Matt Smith’s Eleventh Doctor, the performances have been outstanding from start to finish. Even when the sets and special effects were not all that stellar, each Doctor was still uniquely brilliant. No pressure, Peter Capaldi. Your Twelfth Doctor has some pretty big shoes to fill.

With a ship that can travel to any point in time and space, the Doctor could quite literally show up anywhere.  There have been some limited crossovers with other series (mostly in comics and novels), but it would not be out of character for a blue box to just materialize in just about any other sci-fi universe or continuity. Believe it or not, there is a comic book storyline where the Eleventh Doctor teams up with Jean-luc Picard and the crew of the Enterprise-D to fight a bunch of Borg/Cybermen hybrids. Yeah, my geek is showing.

But even within the confines of the show, we see the Doctor meet historical figures from Shakespeare to Madame de Pompadour. Whether he lands in Victorian England (which he does quite a bit), Renaissance Italy or Pompeii, there really is no storyline − past or present − that the Doctor couldn’t participate in. He just sort of goes with everything, and it’s glorious. The adventure possibilities are truly limitless.

So there you have it, folks. In broad strokes, those are the reasons why this author loves the Doctor. If you are a science-fiction fan of any stripe, and haven’t watched this show, I can’t recommend Doctor Who enough to you.  In my opinion, the Doctor is one of the cornerstones of sci-fi, and is well worth discovering for yourself if you haven’t already. Who knows, you might just find yourself cruising ThinkGeek for a TARDIS mug or Dalek ice cube tray.