[Note: This is partially a bit of Fallout 4 satire, but also an ‘in character’ way to clear things off my chest that the game left unresolved. I almost always play female characters in Bethesda games, and this one is no different, so take note. There are MAJOR MAJOR SPOILERS ahead, so if you don’t want to know about the story and characters of Fallout 4, opt out now.)

From the desk of Evelyn Weir (née Moore), Sole Survivor of Vault 111, Director of the Institute, and General of the Minutemen:

[ Personal Note: I’m not sure what’s wrong with me. I don’t know if I was always this conversationally stunted, or if my long stint in cryo storage has somehow affected my brain. Maybe Nate was just too polite to point it out to me, but these days it seems that I can only respond to any talking point in four basic ways. I’m not sure why.

Oftentimes what actually comes out of my mouth is different from what I intended to say, or I am unable to articulate certain feelings, nuances, or even share basic information. I’ll attempt to be funny and come off as hurtful; I’ll misinterpret what is being said and respond with something I would normally never dream of. I don’t remember being this limited in law school, but the person who emerged from Vault 111 is quite different in many ways from the person who went into it.

Regardless, this ‘limit of four’ does not appear to affect my ability to write, and so I pen these letters to my friends, family, and the people I’ve met along my travels in the Commonwealth. ]

To Shaun Weir, Former Director of the Institute:

From the moment I set foot out of Vault 111, you were my driving concern, the reason behind my every thought and action. I wanted revenge for your father’s murder, of course, but more than that, I wanted my baby back. I did some things in my desperation that, looking back, I’m not proud of. I used people for information. I carved out Sanctuary Hills on the blood of many raiders, ghouls, and supermutants. I turned myself into something I could barely recognize in the mirror. But, I did what I had to. I needed the resources and allies to find you.

And then, when the moment arrived (with you staring down the barrels of my minigun while I stood there menacingly in red power armor), I realized that I had missed your whole life. Not only were you physically old enough to be my father, but you were dying to boot. And we were perfect strangers. We had no relationship, and you acted curiously detached from me at all points. Would a simple “I love you, mom” or a hug have been too much to ask?

I still think that you should have read Descartes and applied a healthy dose of cogito ergo sum to your conduct towards the Synths. They deserved better than what they got from you. They are your children, and my thus my grandchildren. I intend to treat them as such. I also think that what you asked me to do the Underground was not necessary, and horrible. That was a mistake, and one I wish I had never been a party to.

But even with the Underground’s blood on my hands, the loss of life was kept to a minimum. I can only imagine the carnage that would have come to pass if the Underground or the Brotherhood ever had their chance to destroy the Institute. I promise that I will continue your work with the Institute, albeit on a different trajectory. Too bad you were never able to fully articulate your vision of the future to me (which is still pretty nebulous, I have to admit). Regardless, I count myself lucky to have known you for the brief time I did, even if it was only to lose you again. You can’t know how much that hurt. 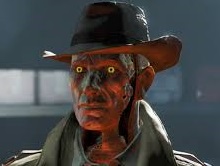 I know you feel that you are merely a pretender with dead man’s life in your head, but I urge you to consider that our memories, our will, our personality…those are the things that make us who we are. I don’t see you as an android pretending to be Detective Jack Valentine of the BPD. No, I see you as Jack Valentine reborn. One day maybe you will, too. You didn’t choose this situation for yourself, of course, but you’ve done well with the hand of cards you were dealt. You and Ellie have helped countless people who were down or desperate, and I know you didn’t do it for the caps.

You were instrumental in helping me find my Shaun, and you stood with me through so many dangers and hardships to get to that point. I know you were unhappy with me when I sided with the Institute, and I don’t blame you. I would be in your place. Somehow, though, I couldn’t tell you that the son you helped me find was, in fact, the Institute’s leader. It seems like that might have cast my decision in a different light for you.

But, I am glad you haven’t abandoned me. Rest assured that I will use the resources of the Institute to determine why you were discarded, if you want, and to ensure the fair treatment of Synths of all types. Also, I hope you will consider staying on in Sanctuary Hills as its resident sheriff. The town needs it, and there is no one I would trust more in that position. The badge is yours if you want it.

Piper, you are my best friend. Some of my best memories of my time in the Commonwealth are when I donned the signature coat and fedora of the Silver Shroud. You looked the part of the side-kick in your dashing red trenchcoat. I loved those times. You hunt the truth, even when it’s hazardous to your health (shall we say especially when it’s hazardous to your health). But you never give up, and you help people, and not just when it’s convenient or easy.

Like Jack, you felt betrayed by my decision to join the Institute. I can’t seem to convince you with words (certainly when we speak face to face), so I hope that actions will suffice instead. I have already decreed that all Synths that want to live on the surface, freely and without further contact with us, may do so. The abduction and replacement program has been terminated (along with the troublesome scientist at the helm of it). You have my solemn and most sacred vow to use the technology and resources at my disposal to help rebuild the Commonwealth. You’ve put your trust in me before, and I hope that you will do so again.

So how about this: You want the real story of the century? How about an all-access press pass to the Institute itself? No restrictions, no censorship, just you and the inside scoop. What do you say? Oh, and you called it on Mayor McDonough, just FYI. Yep, totally a Synth. Again, not sure why I couldn’t tell you this before, but there it is.

You are the only living family I have left, my one link to my old life before the war. You remember Nate and Shaun just as I do, and the happy little home in the suburbs that we all shared together. You were there when we first brought Shaun home from the hospital. You cared for him, and us, tirelessly ever after.

And it is because of that, that I owe you the biggest apology I’ve ever given out. We didn’t take you to the vault when the alarms sounded. I should have tried, but I was scared. When the alarms went off, I ran. You deserved better than to be abandoned to that uncertain fate. I can’t tell you what it means to me that you remained around Sanctuary Hills for two centuries waiting for our return, or that we were reunited.

Like the others who had a stake in me finding Shaun, I couldn’t tell you that I had found him, and that he was alive. But he’s gone now, having died from a vaguely defined disease that the Institute, in all their knowledge, was powerless to stop. I know you would have wanted to see him again. He had Nate’s eyes, bright and clear and intelligent. Looking into them was like seeing a window to the past.

With his passing, however, I know that I can’t reclaim the past; I have to move forward. I used to think that family was only blood, only human, but I was wrong. You, Jack, and Curie have shown me that family transcends mere flesh and circuitry, and I’m glad you are here to help build a future with me.

[Personal Note: There’s so much more to say. I’m still reeling from all the ramifications of what my actions have brought about. “War never changes,” that’s what Nate used to say, but lives are something else, something different. If my time in the Commonwealth has taught me anything, it’s that Life is Change. We’ll just have to see where these changes take us. ]