When you hear that someone is a gamer nowadays, it conjures up all sorts of images. Maybe a Twitch gamer doing livestreams with a headset, or someone who enters a Call of Duty tournament and plays competitively at a local con. In almost all cases, the term ‘gamer’ deals specifically with video games.

Well, when I hear the word, I tend to think of someone who enjoys tabletop role-playing games first, then board games second, and then video games. Maybe I’m just weird that way. Or old-school. Or both.

When I played original NES games back in the day, I didn’t really consider myself a gamer, per se. It was really when I got into tabletop RPGs that I felt that I was truly a “gamer.”

Let me share with you how it all went down. This is my origin story, if you will.

Don’t forget to add all your miscellaneous modifiers.

The spark that started the bonfire was a set of choose-your-own adventure books called the “Fighting Fantasy” by Steve Jackson and Ian Livingstone. These differed from many of the other books of the day because they had a dice-based combat system to go along with the adventure. You had a character sheet, magic items that you could collect that boosted your abilities or healed you, and all sorts of other cool stuff that really set them apart from the rest.

Being in a small town, I didn’t have access to many of them. Both of the ones that made an impression were obtained through ‘book club’ newsletters from my school, in this case TROLL and ARROW. Through them, I got my hands on two Fighting Fantasy titles: Demons of the Deep and Rebel Planet.

The former dealt with a brave sailor’s trials in Atlantis as he attempts to settle the score with the murderous pirate, Captain Blood-Ax. The latter was about a secret agent among the stars who attempts to unseat humanity’s conquers, the Arcadians, armed with his wits and his trusty lightsaber.

I loved the interactivity of them, and the vibrant writing style. You could play through different endings if you messed up and died, horribly in some cases. The concept really captured my imagination. When I was in 7th Grade, I happened upon a book in the Eustace Junior High library. This one: 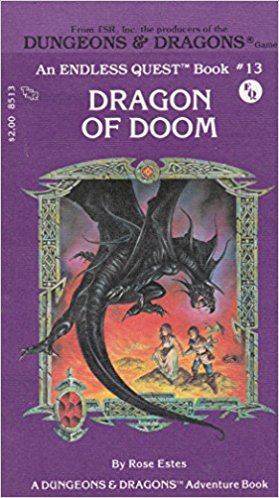 I have a copy of this book in my personal library. It was the gasoline poured on the fire.

The ENDLESS QUEST series didn’t have the combat system, but it did have some compelling story lines. I remember reading the introduction where you, the main character, are sent to find a way to defeat a dragon whose very shadow can kill all life. When Shen, the eponymous dragon of doom, takes flight across the countryside, you can follow the trail of withered planets and dead animals.

If you look at the cover art, you’ll notice something else. It reads “DUNGEONS & DRAGONS” in bold letters across the top. My grandmother certainly noticed this, and promptly made me take it back to the library, and explained that I shouldn’t attempt to check it out again.

Dungeons & Dragons barely registers today in popular culture as a thing itself, outside of a few Gary Gygax memes, references in the Big Bang Theory, or Wil Wheaton videos. It still has a geeky connotation to it, but understand that at this time, Dungeons & Dragons had a vaguely sinister reputation. There were some who thought it was outright Satanic.

Yep, it wasn’t cute and adorable and nostalgic like in Stranger Things. Some groups used to think it was a (and I kid you not here) a way for teenagers to sell their souls to the devil. Movies like Mazes and Monsters or the Chick tracts at the time didn’t help, either.

Of course, when my grandmother told me to take Dragons of Doom back to the library, she virtually guaranteed that I would go learn more about it. And I did. I was no stranger to comic-book shops, and many of them sold D&D products, as well as a host of other RPGs. I talked with some of the guys there who played them, and it didn’t sound like my curiosity was endangering my immortal soul.

And then, out of the blue, I found out that one of my friends, Dan, actively ran different RPG games after school. Some of them he made up himself, and others were published, off-the-shelf games. I soon began hanging out at his house after school with his older brother, Jay, and another guy we knew, Donny. Dan was instrumental in forming my early understanding of how RPGs work. He was the first one to explain to me what a d20 was and what went into building a character.

The first time I made up a character, it was a home-brewed system that Donny had made up called “The Blade Lords.” It was loosely based off of the Palladium RPG systems, using many of the same races, but had a focus more on sword-play and arena fighting than magic. The character was a “swordmaster” named Ulfric, and he was from a race of humanoid canines called the “Wolfen.” I only played him a time or two, and his character sheet is sadly lost to the sands of time.

After that, Dan ran a round of Teenage Mutant Ninja Turtles & Other Strangeness, also by Palladium Games. Yes, they made a TMNT-themed RPG, and it was really good. Only this wasn’t the happy-go-lucky ’80s cartoon version of the Turtles. No, this was the original Eastman and Laird version, harsh and unforgiving.

Everyone wears red around their eyes, yo.

My character was a mutant alligator named Spike, who was also (of course) a ninja. I went on to play many different games with Dan, Jay, and Donny. Sometimes my other friend Cody would run a game. We played all through junior high and high school. I made up many different characters during this time, including one time in the Batman RPG where my character accidentally-on-purpose killed Batman. A dubious honor, to be sure.

I also began running games of my own at this time. One of them I ran in the lunchroom before the bell rang with my friends Robert, Keith, and Cliff. What made this one different was that I had made up the game system. It was a simple d6-based game with heavy emphasis on roleplaying, which I called “RPG To-Go.”

It was also during this time that I realized that my cousin Travis was big into these games. He lived up in the big city of Dallas. Well, big considering the small town I was living in at the time. When I got a car my senior year, a silver ’84 Isuzu Impulse I called the Millennium Falcon, I was able to head up to Dallas on the weekends to game with his group. There, I made many friends that I’m lucky enough to still have today.

I always thought it looked vaguely like a DeLorean.

Since then, it has been a rarity to not have a game to go to at some point during the week, either playing or GMing. Palladium, Heroes Unlimited, Ninjas and Superspies, Kulthea, Forgotten Realms, Vampire: The Masquerade (I played a Werewolf. Big surprise, huh?), Traveller, MegaTraveller, OMG DRAGONLANCE, Netheril, Valeriand, on and off again, Neverwinter, Storm Watch, The Mean Streets of Thebes, Game of Thrones, Transformers, and hopefully soon…Fallout!

That’s just to name a few.

Of course, I am a gamer in every sense of the word now. It’s not just tabletop stuff, but also board games, and video games. And while the original NES had a big part to play in fostering my love of video games, I didn’t really accept games as a being a part of who I am until tabletop RPGs came into my life.

This entry was posted on Friday, March 17th, 2017 at 6:56 pm and tagged with Games, Gaming, Geekdom, Inspiration, Origin Story, Role-playing and posted in General Stuff, Silly Me, Uncategorized. You can follow any responses to this entry through the RSS 2.0 feed.
« (New)Battlestar Galactica and My Roller-Coaster Fandom
An Easter Among Lions »