Female characters in science fiction have come a long way since the pulp-era days. No longer are they always the cliché ‘maiden in distress’ or merely a means to have a love interest in the story.  Oh, there’s still quite a lot of that goes on, but it’s not quite so omnipresent throughout the genre anymore.

Speaking as an author, I love strong female characters (both reading and writing them). I feel privileged to live in a generation of great sci-fi heroines. We’re talking names such as Nyota Uhura (past and present), Ellen Ripley, Katie Sackoff’s Starbuck, Katniss Everdeen, Honor Harrington, Buffy Anne Summers (or practically any female character from Joss Whedon’s brain), Dr. Dana Scully, Sarah Connor, Susan Ivanova…the list goes on and on. 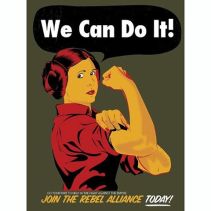 These are the ladies who don’t need anyone to make them powerful, because they are already.  Helen Reddy songs would not be out of place blasting in the background as they go about saving civilization, humankind or the universe.

In this author’s humble opinion, there is one leading lady who takes the crown of strongest sci-fi heroine, and, wow, talk about a tough choice! But if I had to pick just one it would be…(drum roll)…Trinity from The Matrix.

Note that this is the Trinity from the first Matrix movie, not the ones that followed. Sure, she was cool in those too…in the same way that Connor McLeod was also cool in Highlander 2: The Quickening. Cool, but just not the same. For the sake of this post, forget that the Reloaded and Revolutions movies ever existed. I do.

Here are the top three reasons I think this, along with the stereotype that Trinity shatters with a ‘bullet time’ slow-motion jump kick.

1.) She Looks Like She Can (And Will) Kick Your Butt 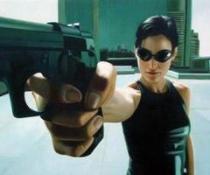 The first scene in The Matrix shows her taking out several SWAT team guys with martial arts moves that border on anime. I remember the first time I saw this in theatre. I was completely sold on the character’s capacity to kick butt.  Carrie-Anne Moss was in incredible physical shape in that role, and she completely owned the physical stunts necessary to convince us of Trinity’s formidable hand-to-hand skills.

Have you noticed in the movies how many times we see a rather diminutive female character going toe-to-toe in a fistfight with goons more than twice her size and weight? Yet she wades through tons of them as though they were nothing. Does that really seem believable to you? Most of the time it looks pretty forced, leaving many of us thinking um, what? With Trinity, her combat abilities don’t seem out of place at all. Once you know that she can bend the Matrix, it makes even more sense that she can go through even highly trained special ops-types without breaking a sweat.

2.) Not Just Another Pretty Face

Carrie-Anne Moss (and thus Trinity) is beautiful, no doubt about it. At no time in the film, however, was she so glammed out that she no longer fit the role. Trinity comes from a dark and hard world, one where she risks her life on a daily basis to fight a system that has enslaved humanity without its knowledge.  If she couldn’t pull her own weight on missions, she wouldn’t have survived for so long. In that sense, she doesn’t suffer from “Bond Girl” syndrome, where her usefulness and contribution to the story are just skin deep.  Quite the opposite, in fact − she’s integral to the story.

Also, Trinity is uber competent at what she does. Even after Ted “Theodore” Logan came along to become the Kwisatz Haderach, she remains one of Zion’s elite operators.  When Neo goes in to rescue Morpheus, who’s the other half of the assault team, in what was surely a suicide mission, the one he could not have done it without? Sorry, rhetorical question.

Okay, ladies, here’s a question for all of you. Does it feel like some female characters are stripped of their femininity when they are put in what would be traditionally considered a ‘man’s’ role? It’s almost as if the idea of a woman who knows how to mix it up in a brawl or a firefight can’t be considered womanly.

I disagree with that idea, of course. More than that, I disagree with the underlying assumption that puissance at arms is something uniquely masculine, or (more to the point) not feminine. While The Rules would not approve of ladies who know how to field strip an M-16, set explosives or do anything else a Navy SEAL might be trained in…I do. For me, femininity and masculinity are not about what you do, but who you are.

In the case of Trinity, she is very much a woman. At no time does she come off as mannish or butch, and she doesn’t need to adopt the caricature of male persona to be brave in the face of nearly impossible odds, or to fight for her cause or for those she loves. She doesn’t have to give up one to have the other, and I love her for that.

So that’s how I see it. Of course, I’m a guy, so me going on about all this might be comical to some of the ladies out there. Let’s just remember that this is an opinion piece, after all.

What do you think?

This entry was posted on Tuesday, May 28th, 2013 at 9:03 pm and tagged with Carrie-Anne Moss, Girl Power, Matrix, Sci-fi, Science fiction, Trinity and posted in Sci-fi Stuff, Uncategorized. You can follow any responses to this entry through the RSS 2.0 feed.
« Backwards Compatible – Part 1: Genesis
Why I Love Villains »