[Note: I do not consider myself a movie critic. What follows is just one fanboy’s opinion. Most of the time with these reviews I watch the movie only once, but let’s be real here…it’s Star Wars. I’ve seen it twice at the time of this writing. And as always, there are MAJOR SPOILERS ahead, so take heed.]

Great! What does that mean, exactly?

Just as we thought, Star Wars: The Force Awakens has indeed shattered all sorts of box office records. Considering the dark, yawning abyss of the prequel trilogy (easily the greatest cinematic disappointment of folks my age), I went into this movie with neutral to low expectations. Fortunately, I had avoided spoilers with ninja-like online reflexes. J.J. Abrams is normally very good at what he does, but Star Trek: Into Darkness didn’t work for me on many levels, so it was with a fortified and guarded heart that I entered the move theatre.

First Impressions: I took the movie trailers with a grain of salt.  Phantom Menace’s trailer is still one of the best of all time, and we saw how that movie turned out. But, Disney is distancing itself from the prequels as well as tapping into the vast well of nostalgia that folks of my generation have for the original trilogy.

Unresolved Questions (At Least in My Mind): 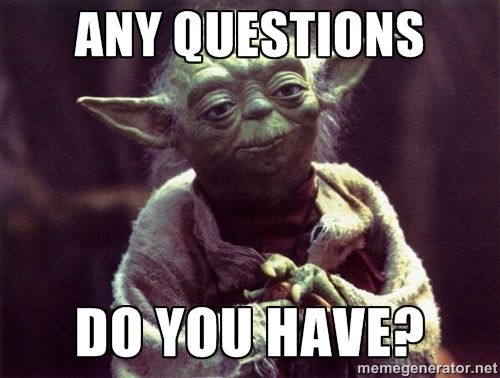 More than I can count, I have.

Where to start? The movie leaves so many things unexplained. If I numbered them out, this blog post could wallpaper the Starkiller Base, so here’s just the highlight reel. Who left Rey on Jakku, and why? Is Rey Luke Skywalker’s daughter? If so, who is her mother? Or is she the twin to Ben Solo? Why did Ben turn to the dark side? Did no one (Luke, I’m looking at you) ever tell Ben that Anakin turned from the dark side before he died? Who is Supreme Leader Snoke? (The horrible Star Wars name generator strikes again!) How does Finn fit into all of this? Why did Han go to see Maz when BB-8 knew where the Resistance base was? Why was the Hosnian system so important that destroying it could ‘destroy the Republic,’ a polity which presumably consists of thousands of systems? How could the First Order, a shadow of the old Empire, build something as massive as Starkiller Base without anyone noticing? Why had they not used the super weapon before this time if it was already loaded? Why don’t they just drain a system’s sun and leave the planets to die in the cold? The list goes on and on. Let’s hope that Mr. Abrams doesn’t repeat the mistake with Lost and actually explains to us what’s going on.

The character of Rey is pretty divisive, it seems. Is she a Mary Sue? Is she OP? Is the whole debate over her inherently gender-biased? Would we even have this discussion if the character were male?

Here are my thoughts: Yes, she does seem to be good at everything. She’s a good pilot, hand-to-hand fighter, mechanic, climber, pistol shot, etc. She picks up Force powers with no training, and she bests Kylo Ren when she has never wielded a lightsaber before. It does seem a bit unbelievable, but it is a movie called ‘The Force Awakens,’ and Rey is obviously more steeped in the Force than anyone else around her. Isn’t that enough for us to suspend our disbelief?

But there’s something else going on here that I think is important. Star Wars isn’t really science fiction. Sure, it has starships and lasers and Wookies, but at its core, Star Wars is really a fantasy tale. A straight-up Joseph Campbell Monomyth. So, I think the character should be judged by fantasy standards. If we take Rey and plop her down into Middle-Earth or Krynn, do any of the arguments against her have validity?

Do we really question that Eowyn is able to take down the Witch-King of Morgul? What about Tauriel? We buy that she is excellent at everything (except perhaps picking a significant other) and practically indestructible just because she’s an elf. Why is Rey any different? Here we have a cool female protagonist that’s interesting, heroic, brave, athletic, and one that is not portrayed in a exploitative or sexualized manner.

We have been waiting for a character like Rey to come along. And if there’s going to be someone like her in popular fandom, Star Wars is the natural place for her to live.

Oh, so THAT’s why Luke isn’t on the movie poster.

It always does my heart good to see good work rewarded. The last few years have made me a bit cynical on this point, particularly due to Michael Bay’s hatchet job on the Transformers franchise. Star Wars: The Force Awakens is a good movie, and I wish it well.

It is far from a perfect movie, however, and its flaws led me to merely like it a whole bunch rather than love it like the first Avengers. Still, it is wholly worth the price of admission. I plan to see to see it at least one more time before it leaves the theatres.

But walking out of the movie theatre twice, with all the feels I’ve carried with me, has made me wish that the name “A New Hope” hadn’t already been taken.

This entry was posted on Thursday, December 31st, 2015 at 9:36 pm and tagged with Fanboy Opinion, Fantasy, Movie Review, Nostalgia, Science fiction, Star Wars and posted in Fanboy Movie Review, General Stuff, Uncategorized. You can follow any responses to this entry through the RSS 2.0 feed.
« Letters from Vault 111
Galaxy Quest – Why I Love It Like Wrath of Khan »