Garden of the Gods: An Interview with Author Stephen J. Stirling

I recently had the pleasure of speaking with Stephen J. Stirling about his latest novel, Garden of the Gods. I was lucky enough to read it early and found it to be an concise and poignant thriller. I highly recommend it for anyone who likes what I call ‘introspective action.’ That is, the kind of book that is action-packed, but keeps you pondering its message and themes for days afterward.

This is something of a first on this blog, but it has given me the idea on having other authors on to talk about their work. For now, though, let’s talk to the man himself about Garden of the Gods! 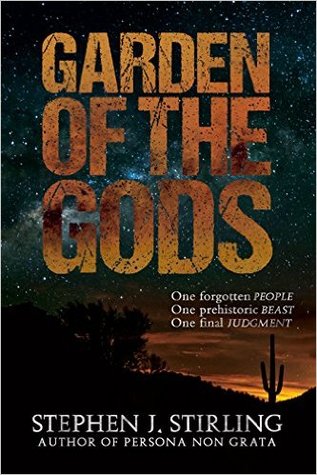 Hello, Stephen. We’re so glad to have you on Sector M! I always appreciate the opportunity to speak with another author about their methods and body of work. So, if you’re ready, let’s dive right in, shall we?

Thank you for having me! I always enjoy my chats with the leadership of Sector M and our glimpses into the future.

Let’s talk about your latest book, Garden of the Gods. Without giving too much away for readers, what can you tell us about the story and your influences for it?

The story itself revolves around a Native American tribe in the northeast Arizona desert. But Garden is largely a statement about worship—any worship—how it enriches our lives and what belief for each of us is really all about. The fact that we live in an age that needs religion so badly was the driving force behind writing this story.

I remember that Alan Moore used to say that the plot of a story is wholly different from what it’s about, meaning the themes, allegory, morals, and all that good stuff. So, what is Garden of the Gods about?

Well, Garden of the Gods is about Native Americans, their rich heritage, their connection with the past, and their hope for the future. . . (and it is also about monsters). But to call it a simple action/adventure would do the story a disservice. The story’s subplot proves that every resolution within this book was motivated by faith, or the lack of it.

The book is a period piece, in more than one sense of the term. What kind of research and preparation did you do about the time period, the various species you include, and native tribes when writing it?

The American southwest is a treasure of unique people and, as of yet, not wholly discovered zoological life. It is a human and animal ecosystem in constant flux, breathing and pulsating with the drama of life. Writing is a funny thing. You begin researching one topic, and end up somewhere entirely different. The Native American people against the backdrop of wartime America was where I tried to focus my research—I wanted to do them and their heritage justice.

When you are writing a book, what is your method? Are you more of a ‘planner,’ who outlines everything in great detail ahead of time, or are you more of a ‘gardener,’ who throws characters into a situation and lets it develop organically without preconceived notions of the outcome? Where you do you fall in that continuum, do you think?

This question is very important, and my answer is—yes. You think you’re one kind of writer who has all the characters lined up and ready to do what they’re told, and suddenly they turn on you. They come out fighting and you’re left to clean up their messes. I guess you could say I fall somewhere in between the two methods.

Let’s talk about your main character, Matt Hayden. He strikes me as being cut from the same cloth as many two-fisted pulp-era adventurers, like Allan Quartermaine and Indiana Jones, and perhaps even a hint of Cussler’s Dirk Pitt. What were your influences and thoughts when creating your leading man?

Hayden is a hero cut from whole cloth, at the same time with a huge wrinkle broadening him into a sympathetic strength that is instantly likable. I did craft him between literature’s Allan Quartermaine and living legend Bring Em’ Back Alive Frank Buck, and yet the combination makes him unique among American characters.

And what about the secondary and/or support characters? What were their roles when placing them into the overall ensemble?

The Nyah Gwaheh, the armored bear, has a very complex role in the story. In some ways it serves as the primary antagonist, but it’s clear that it has a deeper, more symbolic role to play within the narrative. What sort of metaphor does it represent?

The Nyah Gwaheh is a living parable of religious value and the things that we worship, whether we know it or not. He is the driving force of the book.

Any chance or thoughts on a sequel? No pressure…

Oh good, because I don’t see a sequel in the future. I think I’ll leave the characters to their own devices for a while.

This last question is pretty free-form. What would you like the readers out there to know about your book? Anything you like. Here, I’ll hand you the proverbial megaphone.

Well thank you! I’ve never used a proverbial megaphone before. I’d like to leave you by saying I hope others will find as much joy in reading this book as I found in writing it; and if they find an introspective moment—or two—to contemplate their own spirituality I will have accomplished even more.

Thank you for taking time out of your schedule to chat, Stephen! It’s been a rare pleasure.

The pleasure is mine! Thank you for your interest in my project and your insightful questions. Talking with you has been a rare treat.

Take care now, and don’t be a stranger!

There you have it, folks – right from the source himself. Garden of the Gods is on bookshelves now at Deseret Book stores. It’s also available in print or digital format on Amazon and Barnes & Noble.com.

This entry was posted on Friday, December 16th, 2016 at 5:28 pm and tagged with Adventure, Author, Author's method, Book, Garden of the Gods, Interview, Novel, Review, Stephen J. Stirling, Writing process and posted in General Stuff, Guest Blogs, Uncategorized. You can follow any responses to this entry through the RSS 2.0 feed.
« My (Most Recent) Trip to the National Museum of the Pacific War
Fanboy Review #6 – Rogue One: A Star Wars Story »